New Delhi & Bengaluru: Big targets get people talking. That is precisely what happened in June 2015 when the Narendra Modi government quintupled the target for solar power. By March 2022, the government said, India would have 1,00,000 MW of solar capacity.

With this, the country placed a big bet on a future where clean energy would play a crucial role. While some called it wishful thinking, others said the target was not unrealistic.

These two targets mean solar parks alone would contribute to 40% of India’s installed solar capacity in three years. But given the slow progress in setting up solar parks — owing to land acquisition issues and challenges in evacuating the power generated in these parks — that seems highly unlikely. So does meeting the 1,00,000 MW target by March 2022.

The solar power sector has lost some of its momentum in recent months. This is worrying, given that solar power is crucial to the government’s plan to double the share of renewable energy in India’s installed electricity generation capacity to 40% by 2030.

The target is part of India’s commitments under the 2015 Paris Agreement on climate change, which also include cutting emissions relative to GDP by a third by 2030 from 2005 levels.

Inspired by the success of the 590 MW Charanka solar park in Modi’s home state of Gujarat, the Union government in December 2014 unveiled a plan under the Jawaharlal Nehru National Solar Mission to set up 20 solar parks, each with a capacity of at least 500 MW, across the country by March 2019.

That meant an installed capacity of 20,000 MW in these parks. (India’s installed solar capacity is around 28,180 MW, 8% of the total; thermal power accounts for 64%.) With a corpus of Rs 4,050 crore for the scheme, the government promised park developers Rs 25 lakh per park to conduct surveys and prepare project reports, and Rs 20 lakh per MW or 30% of the project cost, whichever is lower.

In March 2017, the government decided to be even more ambitious and announced that it would set up 50 solar parks with a capacity of 40,000 MW by March 2020. The deadline was later extended by two years. The government’s financial assistance also doubled to Rs 8,100 crore.

What is the status of solar parks now?
The government has so far approved 42 solar parks with a capacity of 23,449 MW. Some of the parks have a proposed capacity of less than 500 MW.

According to a senior official at the Ministry of New and Renewable Energy (MNRE), only 5,835 MW has been commissioned in a handful of parks. To meet the 40,000 MW by March 2022, the capacity will have to increase nearly sevenfold.

Does this mean the target will be lowered or the deadline extended? The MNRE official does not think so. “Another 14,000 MW will be sanctioned under the new solar park policy,” he says, requesting anonymity as he is not authorised to speak to the media.

The idea behind solar parks is that the developer — a government agency or a joint venture between a state agency and a private player — will make the requisite land available to power producers, in addition to giving other infrastructure.

Since each MW of solar power requires around five acres, setting up large projects means buying huge tracts of contiguous land, which is not easy for most companies.

Nikhil Dhingra, chief executive of Acme Solar Holdings, says solar parks increase competition, bring down tariffs and attract new players. But the parks are a good strategy only when there is upfront control over land titles and the evacuation infrastructure, he says. “This isn’t being done in real time, along with plant development. This will make solar park unremunerative and the commissioning schedule won’t be fulfilled, thus defeating capacity targets.”

Acme has nearly 1,000 MW of operational capacity in four solar parks, including at the two largest operational ones — the 2,255 MW solar park in Bhadla, Rajasthan, and the 2,000 MW park in Pavagada, Karnataka. 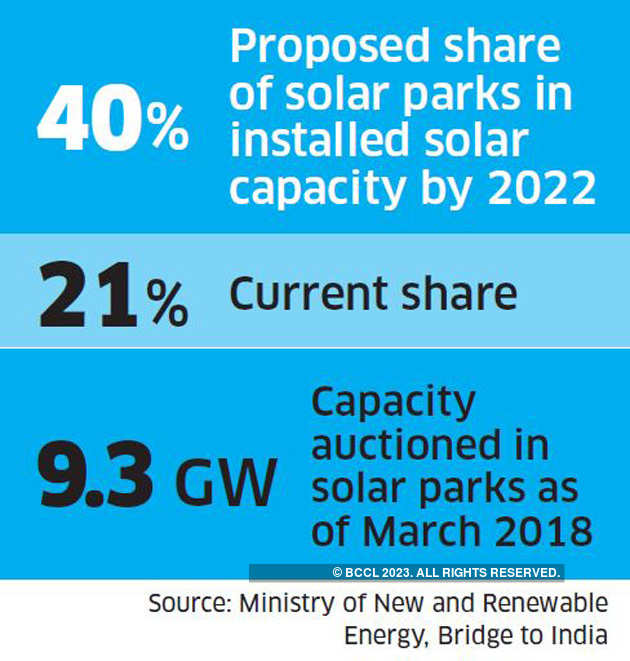 The company’s 205 MW project at the Ananthapuramu solar park in Andhra Pradesh was delayed last year owing to the evacuation infrastructure not being ready and problems with transfer of land titles. “We had to bear the interest costs for the period from scheduled commissioning to actual commissioning.”

Hero Future Energies was supposed to get around 1,500 acres for its 300 MW plant in Bhadla, around 200 km northwest of Jodhpur, in June 2018. But it got the land in January 2019 and even then, not all of it. The commissioning of the project has been pushed from April to August 2019.

“There are a lot of changes in the shape and size of the land they show you at the time of bidding and the land you actually get, and invariably your costs go up,” says Sunil Jain, CEO of Hero Future Energies. A standalone project also faces the challenge of land acquisition, he adds, but a solar power producer may opt to set up a plant outside a park for faster execution.

However, Sumant Sinha, CEO of ReNew Power, the country’s largest renewable energy company, says a solar park makes the execution of a solar project simpler. “The biggest issue is aggregation of land.” A quarter of ReNew’s 1,500 MW of operational solar capacity is in solar parks, including in Pavagada where it has 350 MW.

The Pavagada park, about 160 km north of Bengaluru, is spread over 13,000 acres leased from farmers. Earlier this year, there were reports of some of the land leased for the project having been mortgaged with a bank by their owners. The Pavagada park has 1,400 MW operational capacity, of the proposed 2,000 MW. “The government should just give us transmission infrastructure in solar parks, we will acquire the land,” says Jayant Parimal, CEO of Adani Green Energy, which has 150 MW in Pavagada. 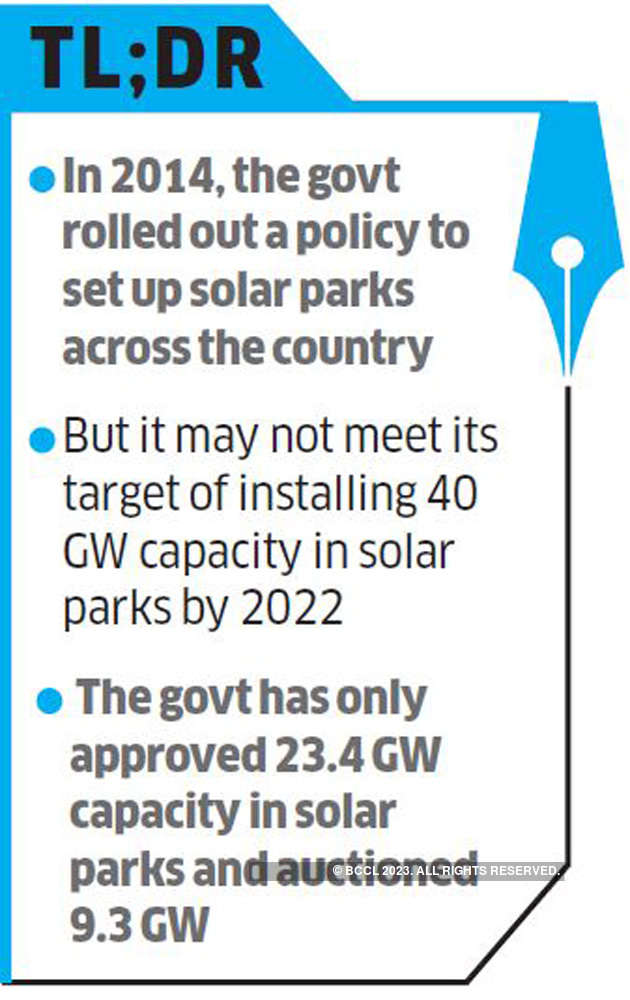 Some solar parks have lately been getting flak for lack of amenities like fencing and site security. “The quality of some solar park facilities is quite poor. They don’t even level the land,” says Vinay Rustagi, managing director of Bridge to India, a renewable energy consultancy. 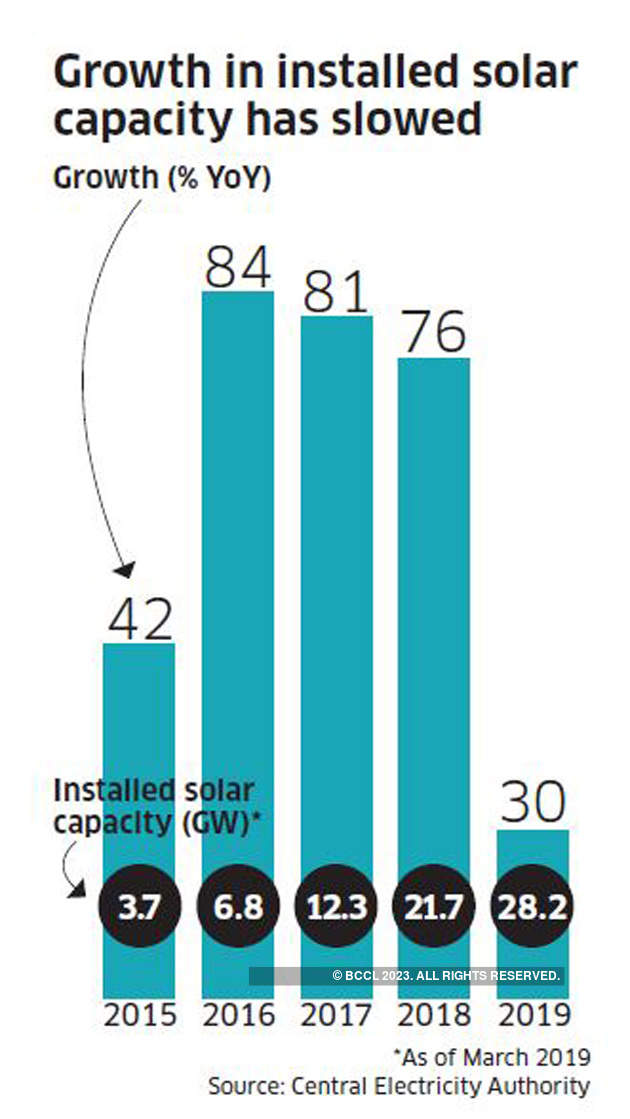 The MNRE in March said the Solar Energy Corporation of India (SECI) will develop the external power transmission infrastructure, and will also make land available for solar parks for a fee. But it left the development of the internal evacuation system, fencing, roads and levelling of land to the power companies. These costs could be factored in the tariff, which will now go up. JN Swain, managing director of SECI, did not respond to requests for comment.

Another problem plaguing solar parks is the charges they levy. The head of a solar power company, on condition of anonymity, says they are disproportionately high relative to the government’s expectations on tariff. Solar parks charge an upfront fee of Rs 40-60 lakh per MW and an annual operation and maintenance fee of Rs 1-2 lakh per MW. In a standalone project, these costs could be at least 30% lower.

Park charges have also been linked to another worrying trend that has been plaguing the solar power sector as a whole.

In January, the Gujarat government cancelled an auction for 700 MW at the Radhnesada solar park as the tariffs were not as low as the government expected. 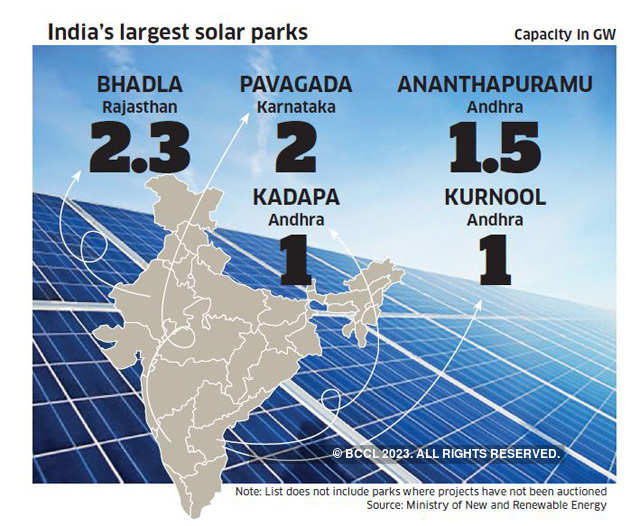 The bidders cited the high park charges as the reason behind the tariffs they quoted. In March, when the Gujarat government invited bids for 1,000 MW at the Dholera solar park, there were no takers as the tariff was capped at Rs 2.75 per unit. The Dholera park, with a planned capacity of 5,000 MW, is the largest proposed solar park in India.

According to Bridge to India, around 5,300 MW of solar bids were canceled in 2018 alone. Ever since Acme won its Bhadla bid at Rs 2.44 per unit, the lowest ever, in May 2017, central and state government agencies have been expecting low tariffs in other projects also. The imposition of import duty on solar cells from China and Malaysia also dampened spirits in the sector. Capacity addition in 2018 was 8,263 MW, 15% lower than in 2017, says clean energy consultancy Mercom India. 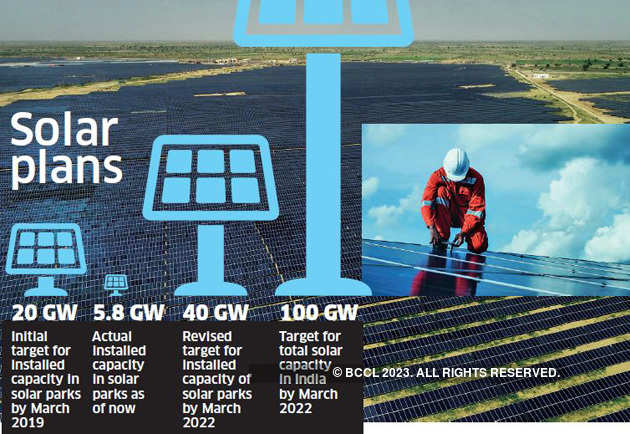 In 2015, Adani Enterprises signed an agreement with the Rajasthan government to set up a 10,000 MW solar park. But it is now developing only 2,000 MW, with 500 MW in Bhadla and the rest in Fatehgarh in Jaisalmer district. The remaining capacity will have to be bid out according to the new rules.

Despite the concerns about solar parks, ReNew’s Sinha points out, both solar parks and independent projects are needed for the expansion of India’s solar capacity. “Of course there has to be deeper due diligence on land acquisition. And legal ownership issues of farmers need to be dealt with proactively,” says Manoj Kohli, executive chairman of SB Energy, a SoftBank Group company.

Even if solar parks become an attractive option for developers, it might not happen fast enough to meet the 2022 target.