In the top five, followed by India, were Chile, Brazil, China, and Kenya

New Delhi: In a first, India has topped the clean energy investment rankings among 104 emerging markets worldwide in a BloombergNEF survey.

In the top five, followed by India, were Chile, Brazil, China, and Kenya. The survey evaluated the ability of the emerging markets to attract capital for low-carbon energy sources while building a greener economy.

“India’s aggressive policy framework and copious capacity expansions propelled it to first place in 2019, from second in 2018. The Indian market is home to one of the world’s most ambitious renewable energy targets and has held the largest-ever auction for clean power generation,” BNEF said in its Climatescope survey titled ‘Emerging Markets Outlook 2019’. 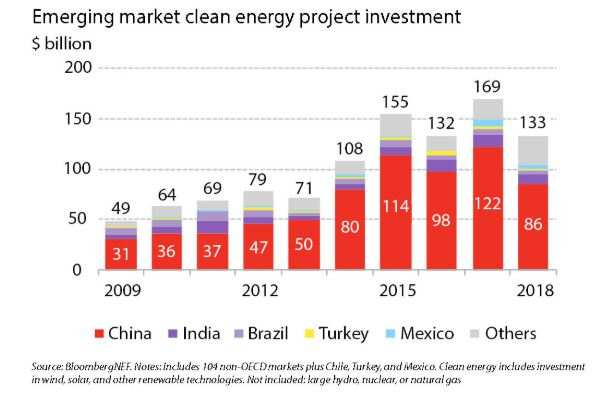 India held the most competitive and largest auctions for clean energy power-delivery contracts, which resulted in the procurement of the equivalent of 19 GW in 2018 alone. “These developments pushed the country to the top of the table on its Fundamentals score and third on Opportunities in the Climatescope ranking,” it said. 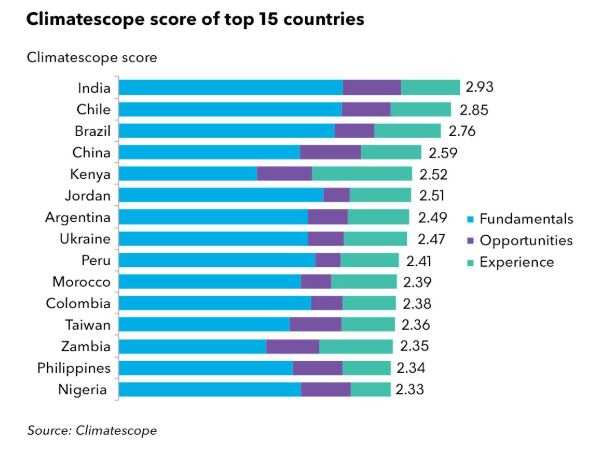 According to BNEF, renewables — excluding large hydro — account for 81 GW of India’s 356 GW capacity. “Since 2017, capacity additions from renewables have exceeded those of coal. While wind capacity additions of 2.3 GW in 2018 were 44 per cent below 2017 levels, solar saw its best year to date with 9 GW installed. This included utility-scale, rooftop, and off-grid capacity,” it said.

Chile dropped to the second spot, however, it scored higher than the previous year, while Brazil rose to the third position from fourth last year. China stood fourth, though the pace of clean energy investment growth in the country had dramatically slowed down in 2018. Kenya, which came fifth, appeared in the top five for the first time.

The Climatescope 2019 survey methodology included 167 indicators and sub-indicators split into three key topic areas that encompassed each country’s previous accomplishments, its current investment environment, and the future opportunities it presents.

Opportunities: This includes a country’s current and future electricity demand, its energy consumption, and its CO2 emissions from the power sector, along with overall price attractiveness, for renewable energy procurement. This topic area seeks to encapsulate future opportunities for clean energy growth available in a country.

Experience: This includes a country’s volume of installed clean energy, historical levels of renewable energy investment and the comprehensiveness of its non-manufacturing clean energy value chains.